Travel Guides: High Adventures And Photos of Places Away From Home

I really like to travel, for pleasure. Travel has a special place in my heart, and despite being frugal in most things, I've discovered that I'm a little more willing to spend money when I'm travelling.

This page is arranged from the newest trip to the oldest trip, Top to Bottom. The latest trip brought me and my family to the Jurassic Quest dinosaur show. The earliest travel was on a tour through Europe in 1999.

One THOUSAND pictures of Disneyland, divided by Disneyland section

Disneyland is a special place. Surgically planned and meticulously maintained, there is something special everywhere you look.97 Pages, 1,000 Photos.

In a continuing tradition of capitalizing on Cabel Sasser's original content, I looked up the meaning of this odd photo from Disney's Animal Kingdom in Orlando Florida.1 Photo.

Have you seen Yosemite? California, 2015

I've lived in California my whole life. When I finally visited Yosemite in May, I found a tiny oasis unlike any other enviroment on earth. 2 Pages, 28 Photos.

When a second park opened up next to Disneyland, they started selling Park Hopper tickets. Should you buy them? No. 1 Pages, 6 Photos.

With only a few days to plan, we tried a super-cheap trip to Disneyland.2 Pages, 32 Photos. 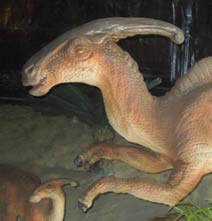 Jurassic Quest: Return of the Dinosaurs is a travelling show of big, animatronic (moving) dinosaur models. Who doesn't love dinosaurs? Imagine walking amongst huge animals like the monsters in Jurassic Park. 26 Pages, 72 Photos. 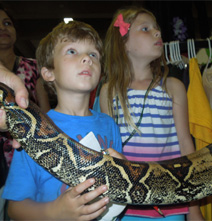 Shows like this are really odd events, they are just marketplaces with a bunch of vendors set up in a convention center. 40 snake vendors? This sounded like it would be worth seeing. 1 Page, 12 Photos.

I try to make it to Maker Faire in San Mateo, California every year. This is an amazing show, like a super comfortable version of Burning Man. 9 Pages, 110 Photos.

I met my Sister's family and we went back to Disneyland for three days. We had some highlights and some lowlights. 5 Pages, 35 Photos. 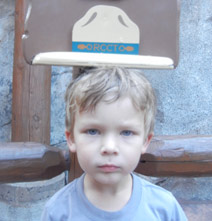 The Cost of a Family Trip to Disneyland

What is the price of a family trip to Disneyland? My family of four drove 400 miles to Disneyland and stayed for three days. I kept close track of the money we spent and the fun we had. This was probably the most detailed cost analysis I did on any of my trips. 7 Pages, 110 Photos.

I finally got a chance to participate in an event by Improv Everywhere. They were right down the road in San Francisco, with an MP3 Experiment. One page, 6 photos.

In 2010 I was invited to speak in Boston at the ROFLcon conference. My wife Stacy went with me and we spent some time as tourists in Boston, MA. 3 pages, 62 photos

In 2010 I was invited to speak at South by Southwest (SXSW) in Austin, Texas. I met up with the guys from Cyanide and Happiness and did a couple of pranks with John Hargrave from Zug.com. 6 pages, 57 photos.

My wife and I went with some friends to the Rodney Strong "Wine & Chocolate" event in Napa county, California. One page, 10 photos

I visited the second Makers Faire at the San Mateo Fairgrounds in 2007. Seven pages, 44 pictures, 8 videos.

Stacy and I, along with our young daughter decided to brave the autumn cold and visit Stacy's brother Richard in Nebraska. Ten pages, 97 photos.

Stacy and I were invited to help John Hargrave pull off a prank during the halftime show at the Superbowl. This is the craziest, most complex, most expensive prank I've ever been a part of. Seven pages, 68 photos, one video.

I flew to Minneapolis in October of 2011 and had a chance to experience the magnificence of their Skyway! I met Holly Peterson and we visited the Mall of America. One page, 38 photos.

I went to Burning man. One page, 80 photos

In November and December of 2001, I travelled to Bulgaria and Turkey. It was amazing & I brought back a few stories and tons of photos. Special thanks to Daniel James for loaning me a tiny Actius laptop. 21 pages, 357 photos.

Sometime around the middle of March, I was offered a chance to drive a car across the US. The offer came from TOTAL STRANGER Jen Wells. She had left her car in California 7 months before, but had arranged to pick in up in Sacramento & drive it to New York City. I agreed to help. We planned to leave on Sunday Morning after the barbarian party , March 31st 2002. Nine pages, 170 photos

In late 2002, I had a chance to visit New Orleans. This was three years before Hurricane Katrina destroyed everything. I hung out with Wendy and took pictures at University of New Orleans for "How Much is Inside an Acre". Four Pages, seventy three photos.

I got an email from a segment producer at MTV2, asking about including something from Cockeyed in a huge Foo Fighters Special. Then I was wisked away to visit New York City and help out with a show. It was awesome! Eight pages, 108 photos.

After writing a few travel journals for other cities, I decided to write an article for my own town of Sacramento. It is titled "Why would anyone want to visit Sacramento?". Five pages, 40 pictures.

My sister Chris and I visited Costa Rica for a week in 2000. It was a beautiful trip, even after my passport was stolen. One page, 14 pictures.

In June of 1999, I was informed that I was going to be laid off, along with hundreds of other Cable & Wireless employees in Sacramento. My fellow Internet Technician Tara convinced me to take the plunge & buy a ticket to Europe. Eric saw us planning (at work) and was welcomed on board. It was the first trip abroad for each of us. We backpacked across Europe. 14 pages, 280 photos.